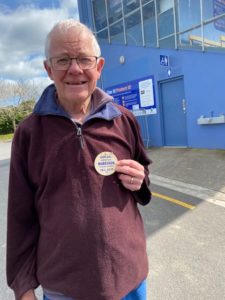 Ray Young, who has been involved in athletics in New Zealand since his arrival from Australia in 1968, has retired from all athletics involvement.

Initially living in Wellington, Ray was involved with Kiwi ACC and Wellington Harriers. On moving to Auckland he joined the Calliope Club, and on moving to Tauranga in 1979 became involved with Tauranga Ramblers Harrier Club and Tauranga Athletic Club. He competed for and served on the committees of all these clubs, and represented the Wellington, Auckland and Waikato Centre’s as a competitor.

Recently Ray recalled his first experience as an official- at the Australian Marathon Championships in 1964. He still has his official’s badge from this competition.

After helping out at competitions in New Zealand for many years, Ray became a graded official in 1994 and has officiated at numerous Athletics NZ Championships, both Track and Field and Out of Stadia, holding A gradings in Track, Jumps, Throws, Walks and Out of Stadia.

Ray has been a regular official at Waikato- Bay of Plenty competitions at all levels, and in all disciplines. His last event was the 2021 North Island Secondary Schools Championships, where he was a field event Referee.

More recently  Ray acted as the official’s coordinator for events at the Tauranga Domain track. He has also assisted at many official’s training sessions, where his experience has been invaluable.

Ray has been President of Athletics Tauranga Inc (Tauranga Ramblers) and Athletics Waikato-Bay of Plenty. He has also been Secretary-Treasurer of the Athletics NZ Officials Association.

In the 1980s and 1990s Ray was involved as a coach with Mount Maunganui College athletics and cross country teams. He also regularly contributed to athletics news columns in the Bay Sun newspaper, and to weekly athletics news on Newstalk ZB Tauranga.

Ray was involved in the development of the all-weather track at the Tauranga Domain, and has served on the Tauranga Millennium Track Trust, including as Secretary.

Thank you Ray for all your  years of service, as a competitor, coach, administrator and official.  Enjoy your retirement. We will miss your smiling face.