SPECIAL presentations were made to long-serving officials Douglas and Ashley Taylor and Jeannette Vedder-Price at an afternoon tea held last Friday 11 November to thank and celebrate their huge contribution to our sport on their retirement. They were presented with certificates to mark their contributions.

Jeannette Vedder-Price, better known as Mrs Porritt Stadium, has been a stalwart for the Centre, maintaining equipment and facilities at Porritt Stadium for many years. I am sure many of us thought that she slept there as there never seemed to be anything on at the track without Jeannette’s presence. Her enthusiasm for the never-ending list of tasks is hard to match.  Hawks and Athletics WBOP appreciate the work that you put into the sport.

Thank you, Jeannette, for the many hours of work you dedicated to the sport.

Douglas and  Ashley Taylor have just about done everything possible in the athletics sphere. Both started as athletes, at first with Hamilton High School, and the sport was very lucky when they decided to become involved as officials. Keeping a watchful eye on the Centre’s finances is another sphere Ashley in particular, has been involved in.

Ashley has been involved with Centre, national and international competitions for many years, in a variety of roles. His first international role was at the 1974 Christchurch Commonwealth Games, where he organised the officials. As a result of that he proposed that a national official’s scheme be implemented in New Zealand, later becoming the Chairman of the National Technical Officials Committee. Ashley progressed through the system, becoming an International Technical Official, with his last appointment being in 2002.

Both Douglas and Ashley have held office as President of Athletics NZ and have received many awards for their involvement – Centre, National and International. The highlight for Ashley was the Halberg Lifetime Achievement Award in 2015- a much deserved reward for many years of service.

Thank you, Douglas and Ashley, for your many years of service. 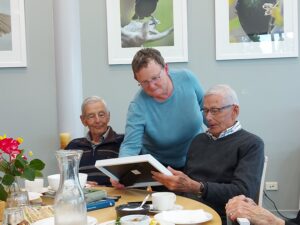 Heather O’Hagan presented the certificates of recognition to Ashley and Douglas.